Resumes and Interviews and Waiting, Oh My! I've always been a fan of The Wizard of Oz.  I can remember when I was a little girl, it would come on TV once a year and I always watched it.  Once I even got to record it on my VCR and watched it I think until the tape broke (oh, the things this generation of children doesn't have to deal with!).  (Of course now that I have seen the musical Wicked twice, I watch it with different eyes thinking "Well, that's not how it really happened!" but that's beside the point...) So I have seen the movie too many times to count, I know the characters and I know the lines, but the past few weeks I have definitely come to identify with the movie more than ever before.

The past couple of months I have felt like I was in the middle of a tornado. The position I currently have with Jessamine County Schools was eliminated, and I had no idea what I would be doing next school year. Having finished my coursework and tests for my principal certification, looking for an administration job was a possibility. After prayerfully considering my options, I really felt led to leave technology and get back into a school setting, so I applied for two assistant principal positions in my district, and was convinced not only was that what I wanted to do, but where God wanted me to be.  For six weeks I had no idea what next year would look like for me, which was upsetting and my MIND felt like it was in the middle of a tornado.  I wasn't sleeping well, I couldn't focus, I was mentally exhausted. I just wanted to KNOW.

Honestly, I was sure I'd get one of the assistant principal jobs, because that was where God wanted me. But I wasn't praying that I'd get them.  All along I prayed that God would put me where He wanted me, and close the doors where He didn't want me. And you know what I learned?  When you pray that prayer, you've got to be ready that the answer you get might not be the one you want.  I found out I didn't get the first assistant principal job, and a little over a week later, I found out I didn't get the other one either.  My texts informing people were answered with a lot of "WHAT!?!?!"s.  But somehow I wasn't really sad.  I was at peace because I knew I'd end up where I was supposed to be...

And so I interviewed for the District Technology Coordinator position in Jessamine County.  This job was created with the funds formerly used for my position, and the job description was very similar to my current job. Today I was blessed enough to be offered the job, and gladly accepted it.  I love technology, I am good at technology, I have built a reputation for myself in our district and our region of the state as far as technology is concerned.  I love the people I work with, from the JCTC staff, to our Central Office staff, to the people I work with at CKATC and KySTE.  I am blessed to work in a district for a superintendent who values technology and what it can do for our students.

So while the tornado has stopped spinning and the house landed and I know where I'll be come July 1 , I feel a bit more like Dorothy now than before.  If I ever go looking for my heart's desire again, I won't look any further than my own back yard. Because if it isn't there, I never really lost it to begin with... 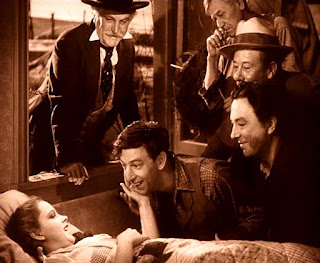 I think I need to buy some new red shoes now.