July 17, 2017
Contradicting the laws of what I think should be true, but confirming the laws of mathematics, my 20 year high school reunion was this weekend. While it was a low turnout (class of 97, if you are reading this, I vote Keeneland for our 25th), it was a fun night with familiar faces, laughing about old times until the wee hours of the morning.

I had stumbled across this picture a few days before the event, taken the summer between high school and college on our way to the Carter County Fair. Inspired by dozens of sibling sets I have hilariously seen do this on Pinterest, I wanted to recreate this picture after the reunion.  When I texted this to the always active group text with Megan and Jen(ny), Megan replied "I am not making that face." To which I corrected her "Yes you are. That's what recreating the picture means." And she did it because I am bossy and maybe she is still scared of me a little. Anyway, we didn't make it back in front of that house, and sadly that 1989 Prelude (that you can't really see but that I know is in the background) is long gone, but we did end up with this: 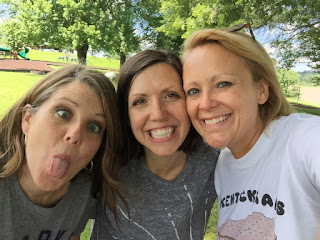 Now, if you are friends with me on social media, you've already seen this, because I posted it immediately. It honestly might be one of my favorite things of all time. I can't help but smile whenever I see it. How has it been twenty years since that top picture? TWENTY YEARS?! I don't get it. As I was looking at this picture over and over every time a notification popped up, I was thinking about the difference in those girls. And not just the few grey hairs and wrinkles that we might be covering up, but the deep down differences too. Not to be too Brad Paisley over here, but if those girls at Grayson Lake could sit down with those girls on West Main Street, what would that conversation look like?

Enjoy the moment you're in. Even if you don't want to be in that moment forever, enjoy it while it's here.
Travel more. Spending money on experiences is much better than spending money on "stuff." You already have plenty of stuff.
Stop worrying.
Stop obsessing about your make up. (Your college roommate is going to tell you that everyone looks basically the same without make up and with. You're going to think she's insane. At age 38, you will believe her.)
Stop comparing yourself to other girls. You are different. Different is good. You weren't created to be them, you were created to be you.
Stop overanalyzing.
Stop and take a walk (you're going to wish you started getting those 10,000 steps a day a lot earlier than you did).
Stop and look around.
Listen to the birds.
Listen to your friends.
Listen to your heart. If that little voice tells you he's not the one, guess what? He's not. LISTEN.
Call people you care about. Even when this thing comes along called texting and you never "have to" talk on the phone, it's good to hear each other's voices.
Stand up for what you believe in.
If you don't want to do something, don't do it. And don't think you have to have an excuse, you don't. Just don't do it.
Tell that boy you think he's cute. Boys are slow sometimes, he might not be catching on.
If it's not something you can talk to your mom about, then you probably shouldn't be doing it.
When the credit card bill comes, pay it off every month (or at least pay more than the minimum payment).
Speaking of money, in 7 years, this thing called Google is going to start selling shares for $85 each. Buy some of those.

Oh, and I know unlike these other two girls, you weren't ever a Girl Scout, but I know you've heard them sing the song "Make new friends, but keep the old, one is silver and the other gold." Take that to heart. These girls will be there for you when no one else will. There will be times you are completely convinced there's no one in the world who even notices you besides them. The next 20 years will be much more eventful than the first ten or so since you met. You'll be there for each other for big things-amazing things and devastating things. You'll hold one another up when one of you can't stand. You'll pray the prayers for one another when one of you is too tired or sad or overwhelmed to even muster the words on her own. There will be a day when you will get to meet their husbands and then, hold their babies, and those moments will be precious. Realize what you've got here, and hold on tight, even when life pulls you apart. In the end, it will be worth it.