October 01, 2010
One of my favorite authors is Sophie Kinsella, the author of the Shopaholic books. Her books are funny, easy to read, and she uses a lot of voice in her writing. My favorite book she has written is called Can You Keep a Secret? (Which BTW, I am fairly certain that someone stole from my house, because I can not find it ANYWHERE...) In this book, the main character, Emma, is on a flight back to London, and the plane encounters some turbulence. As in the oxygen masks drop and everything. Emma, being fairly certain that she is going to die, decides to confess all of her secrets, and I mean ALL of them, to the handsome stranger next to her. Of course, she doesn't die, the plane lands safely, and the next day, she finds out that the man next to her on the plane is the owner of her company. Hilarity ensues. 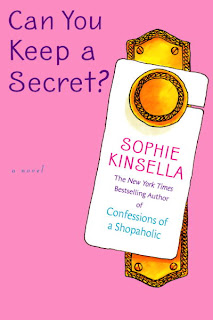 On my way back from New Jersey last week, my plane hit a touch of turbulence itself. Not as much as Emma's and not nearly enough to spill my guts to the old man next to me (he probably couldn't have handled my secrets anyway), but enough to make you wonder. What if something happens? What are my regrets? What do I wish I would've tried? What would I do different? What would I change about myself?

But of course, my plane did land safely. And there was no hot stranger in charge of my company when I got to work the next day. And I completely forgot all those things I was going to change...

A few weeks ago, my friend Andi asked me to come to her classes to let her students interview me to practice on their questioning skills. Most were simple: "What's your job title?" " Where'd you go to college?" "How long have you worked here?" But then they asked me one that stumped me: What would you change about your life if you could? I wasn't prepared to have to think during this interview! So I hemmed and hawed around, and then decided on the fact that I think I would've been just as happy being a high school teacher as I would being an elementary school teacher. Then later that evening, it hit me. I would've taken more chances. Not been so careful. Not been so guarded.

You know, you do only live once. You've got to make it count.
life opportunity