October 28, 2010
You know what I miss? Mixed tapes. I used to love making mixed tapes. And burning a CD isn't the same. Not by a long shot. You can make playlists or burn CDs in seconds, but a mixed tape? That took some thought. That took time.

In Junior High, my BFF Becky and I made mixed tapes like they were going out of style. And they took time. There was no "all of this won't fit" iTunes message. You had to do the math. You'd look at the reel to see how much tape was left, and try to figure out the shortest song you had to fill the space. (We always squeezed in Janet Jackson's "Again" when nothing else would fit.) You also had to consider the recipient. Were you keeping it or giving it away? What kind of message
do you want to convey? Sometimes we'd make one side depressing songs and the other upbeat songs so the tape was versatile enough to fit any occasion. How would you make sure the songs flowed? You couldn't put two Aerosmith songs back to back regardless of how much they made you think of that certain boy. There had to be a buffer song or two in-between.

I listened to some of those tapes until I literally wore them out. Even now, there are old love songs I hear on the radio, and I know what should come next. (I guess music really does improve memory!)

Making a mixed tape was an art... An art lost on this generation. Just like kids today will never really understand what "Party like it's 1999!" means. Nor will they know why when you crank your arm while standing outside a car, the driver knows this means roll down your window. 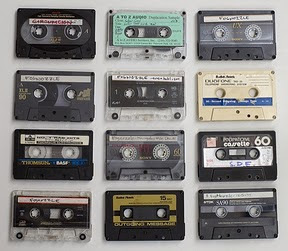 Stacey Woods said…
Erin! Loved this post. I hear you about side A and side B, and cranking your arm to roll down the window. Hilarious! Love your collection of tapes :)
November 5, 2010 at 5:40 PM