I love the movie Field of Dreams. And when I say that I love it, I mean it's my favorite movie in the world. Obviously you know I love sports, plus it has a great father/son storyline, and as an added bonus, Kevin Costner was really cute when he was younger! =) But I always loved the character of Doc Graham. For those of you not familiar with the movie, I shouldn't fill you in on his back story, I should just tell you to go watch it, but I'm feeling generous, so... Archie "Moonlight" Graham was baseball player when he was a boy, got called up to the majors but hadn't seen any action. At the bottom of the last inning of the last game of the season, he got to play right field, but never got to bat. He was called back down to the minors after that and quit baseball to become a doctor in Chisholm, Minnesota. He was the kind of small town doctor everyone knows and loves, and everyone has a story about (you know, the one guy talking about the boxes of hats in his office is the part where I predictably cry every time). Kevin Costner's character, Ray, meets him late in his life, and this conversation ensues:
Ray:...if you could have a wish....

Doc Graham: And you're the kind of man who could grant me that wish?
Ray: I don't know. I'm just asking.

Doc Graham: You know, I never got to bat in the major leagues. I'd have liked to have had that chance, just once...to stare down a big-league pitcher. Stare him down, then just as he goes into his windup, wink. Make him think you know something he doesn't. That's what I wish for. The chance to squint at a sky so blue that it hurts your eyes to look at it. To feel the tingle in your arms as you connect with the ball. To run the bases, stretch a double into a triple...and flop face first into third. Wrap your arms around the bag. That's my wish. Is there enough magic out there in the moonlight...to make this dream come true?

Ray: What would you say if I said yes?

Doc Graham: I think I'd actually believe you.

Ray: There's a place where things like that happen...and if you want to go, I can take you.

Doc Graham: This is my most special place in all the world. Once a place touches you like this, the wind never blows so cold again. You feel for it. Like it was your child. I can't leave Chisholm.

Ray: I understand. I do. But I really think you're supposed to come with us.

Ray: But your wish?

Doc Graham: It'll have to stay a wish. I was born here, I lived here, I'll die here, but no regrets.

Ray: Fifty years ago, for five minutes, you came this close. It would kill some men to get that close to their dream and not touch it. They'd consider it a tragedy.

Doc Graham: Son, if I'd only gotten to be a doctor for five minutes...now that would have been a tragedy.

This weekend, I was home for a funeral of one of Grayson's favorite residents: Jack Calhoun. Some knew him as a great coach. My dad knew him as a great friend. I knew him as one of the greatest teachers I ever had. Before the visitation Friday night, I was reading an article about him from the Ashland Daily, and they told of how he'd been a promising shortstop until a car accident injured his shoulder. Dad says Jack was definitely headed to be a ball player before the injury. As I saw the hundreds of people filing into the East Carter gym for the visitation and funeral, I couldn't help but think of how that injury changed his life, and there are thousands of his former students who are better for it. On my way back to Lexington today, I started thinking of Field of Dreams, and the similarities between Big Jack and Doc Graham. Both small town legends. Both loved by all who knew them. And I am sure Jack had the same wish: to bat in the majors. But just like Doc Graham, I think if you'd have presented him with the opportunity, he would've said "If I'd only gotten to be a teacher for five minutes...now that would've been a tragedy." 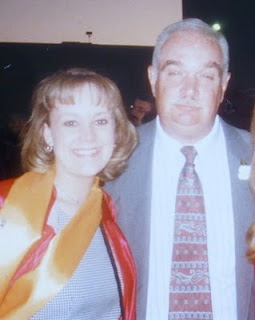 Our loss is Heaven's gain. And to borrow from a fellow Raider's Facebook status, I sure hope the Angels have their hall passes. ♥
Grayson memories teachers