Sometimes It's Okay to be Different

May 19, 2010
This past Saturday, I spent the day in Newport (well, not entirely, I accidentally ended up in Ohio several times) with an old friend. We visited the Aquarium and walked around Newport on the Levee for a while. As we were walking to see what was playing at the movie theatre, we passed this bush. I immediately stopped and told Megan, "This is a blog post waiting to happen!" So, now it's happening... 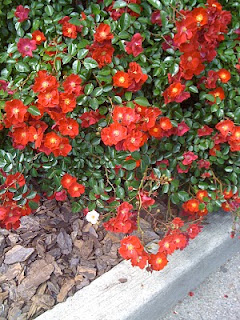 All of the blooms on this particular bush are basically identical. Well, all but one. And aren't you drawn to it? The little white bloom at the bottom, very quietly standing out from the group. Doin' his own thing. Maybe he wanted to be red, but couldn't quite make it happen. Or maybe, just maybe, he didn't want to be red, he wanted to be different. Either way, I like it.
I am a Mac girl (the computers, not the make-up), but even if I wasn't, I think I would love this quote from Steve Jobs:
Here's to the crazy ones, the misfits, the rebels, the troublemakers, the round pegs in the square holes... the ones who see things differently -- they're not fond of rules... You can quote them, disagree with them, glorify or vilify them, but the only thing you can't do is ignore them because they change things... they push the human race forward, and while some may see them as the crazy ones, we see genius, because the ones who are crazy enough to think that they can change the world, are the ones who do.
Sometimes I feel like I just don't fit in, but maybe that's because I am supposed to stand out. =)
happiness life