The Princess and the Squeak (A Modern Day Fairy Tale)

May 10, 2010
Once upon a time, there was a beautiful lovely not-too-bad-to-look-at young (ish) princess named Erin. In her 1080 sq ft castle, she had two bedrooms. Sometimes she slept in the guest room, because it was her townhouse castle, so she could sleep wherever she wanted. But the bed in her bedroom was heavenly. So (nearly) every night, she’d climb into bed, lay diagonally (because she wasn’t sharing this bed with anyone, so she could sleep however she wanted) on top of the TempurPedic mattress pad and drift off to dream land. At some point in the night, however, it would start. And by “IT” I don’t mean the scary clown, I mean the squeaking ceiling fan. What was super annoying about this ceiling fan (that had to have been cursed by an evil witch somewhere) was that it could be on all day and never make a noise, but at night, it came alive. Each night our dear princess would be woken to its incessant squeak. And let’s be honest—this princess needs a solid 7 hours of sleep. The squeak was one of those just-loud-enough-to-be-annoying squeaks. And without a pattern that you could at least get used to. So our princess would lie there and try to ignore it for a while, then when she was so annoyed that she thought might rip the fan out of the ceiling and throw it on the floor, she instead just gives up and turns the stupid thing off, and burn up the rest of the night.
The End

P.S. Because I did hear the squeak, that means that I really am a princess. At least that's how it went in the original... So where is my freaking Prince Charming?!?! 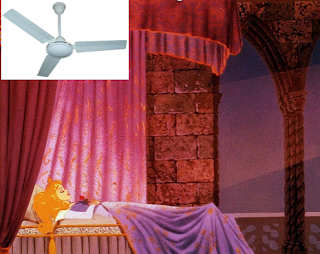