Showing posts from 2015
Show all

A Little Bit of Decorating 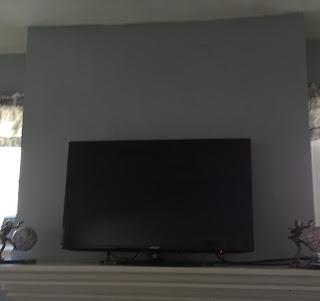 The Problem: I need something above this television.  I have never had anything there, but I just cut the cord with my cable (thank you Sling !!!) and now that the DVR box is gone, and I can finally display these lamps that were my Gurnie's (The story goes, my Papaw bought these at "the thrift" when they lived in Vero Beach, Florida. Gurnie told him they were ugly and were NOT going in her house. Then somehow, she found out they were worth hundreds of dollars, and they adorned her mantle every day after that!) So ugly they're fabulous! Anyway... back to the empty wall space. So I wanted something above the television.  But the walls are plaster and it's a brick chimney behind them, and, well I didn't really want to hammer/drill/whatever to hang something.  I thought about doing one of those vinyl wall decals, but I have one on the adjacent wall that leads to the dining room, so I thought that was overkill... but I did like the idea of a wor
3 comments
Read more

I love my DVR. I love that I can set a series recording and never miss a new episode of Scandal. I love that while watching a UK game, I can rewind and do my own version of an instant replay even if the SEC Network isn't going to show me the play again. I love that at the end of a close basketball game, I can pause the TV and watch in slow motion (which somehow makes me less of a nervous wreck). But I really love it because I can skip through commercials, because let me let you in on a little secret... I Hate Commericals Now, every now and then, there will be a funny commercial (the Taco Bell one where the guy kisses his girlfriend's dad on the cheek because he won't put down his tacos to shake his hand) or a sweet commercial ( Peter coming home for Christmas ) that I don't mind, but in general I am not a fan. I have never taken an advertising class, but I have noticed that commercials are more than just selling us something, they are all about fixing us. A quick look
2 comments
Read more
More posts